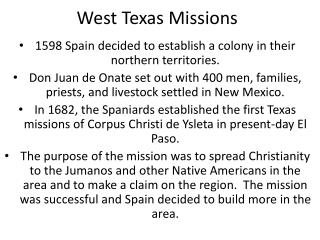 Texas Missions : - . the basic facts. a collaborative effort by 4 th grade teachers in hays cisd. 2. what is a mission?.

Texas Missions - . missions were spain’s main way of colonizing texas and were expected to support themselves. the

Spanish Missions in Texas - . summary so far. europe eyes the americas. columbus came to the new world looking for gold