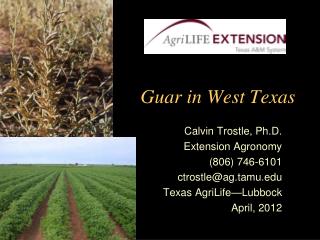 Water Use In Far West Texas - . gilbert trejo gis in water resources, fall 2004 the university of texas at austin.

GUAR GUM - If you're simply a newbie who is actually merely starting out, then this is actually an excellent location to

Texas and The Far West - . mexican war for independence. by 1811, the people of mexico wanted their independence from