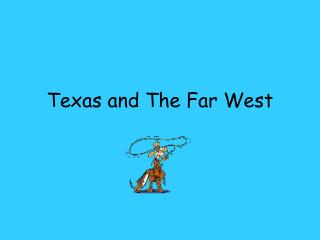 Water Use In Far West Texas - . gilbert trejo gis in water resources, fall 2004 the university of texas at austin.

Far West - . quote from 17 year old. the real test of goodness is not our ability to be perfect, but our wiliness to

The Far West and Territorial Crisis - . i. geopolitics and the expansion of american power. oregon texas mexican-

Far West Conference - . open or closed range? what are the problems and consequences?. common law. as a general rule,

The Conquest of the Far West - . chapter 26. in the late 19 th century ‘the west’ would have been land west of the

The Conquest of the Far West - . chapter 16. the american myth. what is it? what is the myth of the west? is the myth the

Far West Native Americans - . by: riya kabra. before we start. i chose the far west indians as my group throughout this