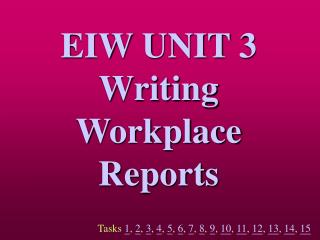 EIW UNIT 3 Writing Workplace Reports. Learning objectives. This unit aims to help you to: understand the nature and purposes of workplace reports and the processes involved in writing them

Unit 3 Writing Modes: - . or organizing a paper. question: what are “writing modes”?. provide patterns for writing

Writing Unit - . today’s objectives. today i will be able to : hand in library forms establish the requirements of a

Writing Industry Reports - . a guide. use all of the following subheadings within the industry analysis (followed by

Writing SPSS Reports - . assumptions. you have taken 100w you achieved basic competence in writing in 100w you have basic

Writing Reports and Proposals - . chapter 14. composing reports and proposals. introduction states the purpose for the