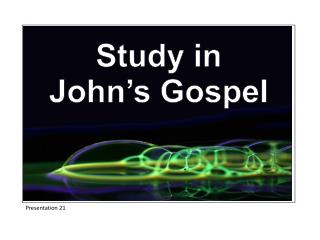 Study in John’s Gospel. Presentation 21. Jesus’ Person and Teaching Chap 7v11-17. Presentation 21. Introduction. There are two questions that children often want answered; 1. “Where did I come from?” and 2, “What holds the sky up?” The first had to do with the child’s identity The Word Is Alive The Gospel of Matthew - . summary narrated by tony gillon. introduction. matthew: from tax collector to

“A Journey with Jonah: One Gospel for Many Nations” - . reed lessing m.div., s.t.m., ph.d. director of the graduate

APSC 150 Case Study 3 Sustainable Mining - is that possible? - . john a. meech, professor and director centre for

John Dalton - And his life. john dalton was born on september 6, 1766he was born in eaglesfield, cumberland, englandjohn

The Word Is Alive 1 John - . introduction narrated by tony gillon. author. the author is the same as john’s gospel.

Lutheran Hour Ministries presents - . mission u school of witnessing. who we are. outreach ministry supporting churches

Encountering the Risen Jesus - In the gospel of