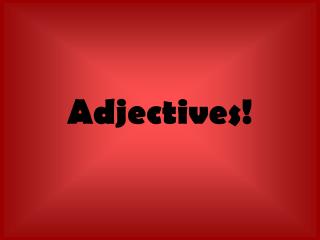 Adjectives!. What’s a stinkin ’ adjective anyway?. An adjective modifies or describes a noun or pronoun. The most common adjectives are “a,” “an,” and “the.” These three adjectives are called articles . ARTICLES ARE ALWAYS ADJECTIVES!. So what about the rest of the adjectives?. Abbreviations - . letter(s) or shortened word used instead of a full word or phrase for example: ‘isn’t’ instead of

Two For the Price of One: Comparatives and Using Adj. and Adverbs Correctly - . adjectives and adverbs unit 8 th grade

JUST NOUNS ! Song - . just nouns…. not articles or adjectives. just nouns. not verbs but only words that mean a person,

Object Pronouns - . object pronouns. person. singular. plural. first. me. us. second. you. you. third. him (male). them.

REVIEW Nouns , Verbs , Adjectives , Adverbs , Pronouns , Prepositions , Conjunctions - . not for long in awe of the other

REVIEW Nouns , Verbs , Adjectives , Adverbs , Pronouns , Prepositions , Conjunctions - . not for long in awe of the other

Lecture 11 Adjectives and Adjective Phrase - . objectives: 1. classification of adjectives 2. function of the adjectives