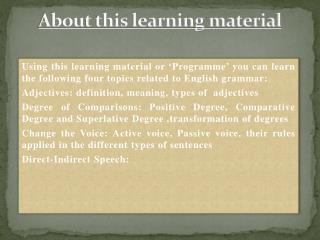 About this learning material About this learning material

Ch. 9 Learning: Principles and Applications - . http://www.sangrea.net/free-cartoons/phil_joy-of-learning.jpg. how do we

Test Design and Management in context of IFDK reference product - . about this course material. this material if for

Reinforcement Learning (RL) - . learning from rewards (and punishments) learning to assess the value of states. learning

Reinforcement Learning - . mainly based on “reinforcement learning – an introduction” by richard sutton and andrew

Topic 3 Physical Acoustics Review - . warning!!!!. this is a review. mastery is essential to understand the material

After the Canvass - . epledge a tutorial for canvassers: assisting donors to make their gift online. do not print! n ote

Learning - . learning: a relatively permanent change in an organism’s behavior due to experience are reflexive actions

Material Safety Data Sheets - . m.j. electric, inc. what is a material safety data sheet (msds)?. an msds is a technical

The Learning Curve - . presented by brian filtz. the learning curve. introduction theoretical definition of the learning