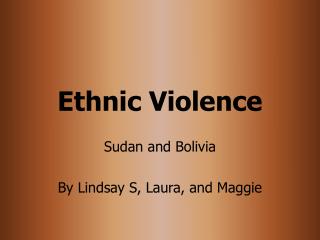 Ethnic Violence. Sudan and Bolivia By Lindsay S, Laura, and Maggie. Development. Development is the improvement of life for a country’s citizens and obtaining social justice within the society. Ethnic Violence - . definition: violence between minority ethnic group(s) and members of the han majority violence among