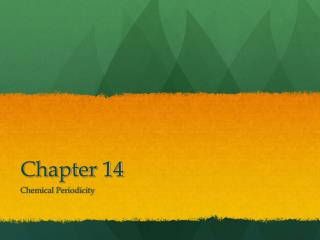 Chapter 14. Chemical Periodicity. Objective A. Chapter 14 is a very short chapter. We also already know some of what is in this chapter. The Periodic Table groups elements according to their properties. Look at the first group. It has H and Li and Na, etc.