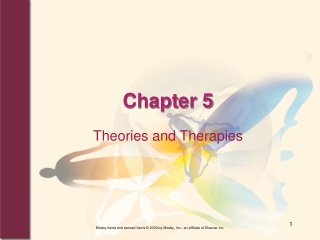 Chapter 5. Theories and Therapies. Learning Objectives. Explain how theories can be applied to mental health care. Discuss three psychoanalytical therapies that resulted from Freud’s work. Identify how developmental, humanistic, and behavioral theories differ in their viewpoints.