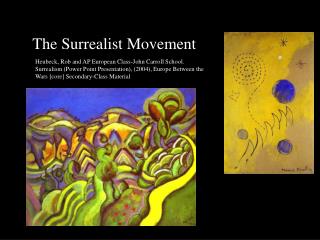 The Surrealist Movement. Heubeck, Rob and AP European Class-John Carroll School. Surrealism (Power Point Presentation), (2004), Europe Between the Wars [core] Secondary-Class Material. Do you know anything?. What is Surrealism? Where did this movement originate? The Movement - . in humans, the movement realizes thanks to: the skeleton or skeletal system the apparatus

Germaine Berton and Surrealists, La Revolution Surrealist - . the surrealist group around magritte “i do not see the

The LGBT Movement - . the history of the movement from stonewall through gay marriage, gender identity and transgender

The symbolist movement - . colm humphreys. characteristics of symbolist poetry. symbolists believed that their work could

The Lyceum Movement - . chris jahoda. what is a lyceum?. the lyceum is an institution for popular education providing

The Populism Movement - . the creation and goals of the people’s party. creation of the populist party. the populist

The Protest Movement - . as it relates to the vietnam war. an era of protest. the idea of civil disobedience as a form of

The Temperance Movement - By: shakira basby chelsea sawyer lindsay peavy. the temperance movement. how it began.