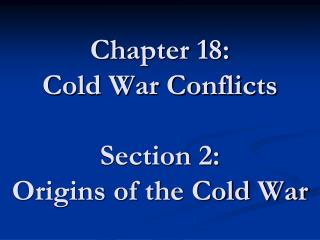 Cold in the USA - Millions of people awoke to painfully cold weather in the eastern united states, with temperatures

1. THE COLD WAR - . definition: a state of permanent hostility between two powers which never erupts into an armed

AP European History - . cold war review. bell ringer: the cold war…what was it?. the cold war was a diplomatic crisis

Temperature and Ideal Gas - . everything is made of atoms in gases the molecules don’t interact with each other. simple