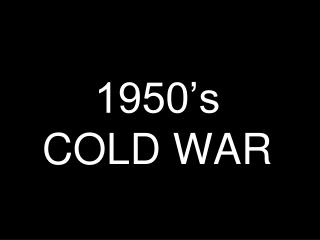 Post-Cold War American Foreign Policy - Part i: the bush and clinton years what have been three goals of american

America Confronts the Post-Cold War Era - . chapter 41. introduction. the collapse of the soviet union and the

The Cold War - . objectives. p. 127. whii.13 the student will demonstrate knowledge of major events in the second half of