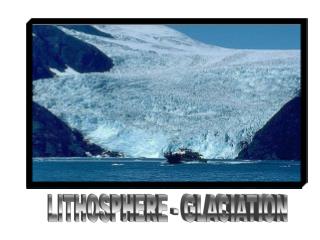 LITHOSPHERE - GLACIATION. Severn Thames line. the Ice Age. The ‘Ice Age’ was a series of advances and retreats of the icecaps. It lasted from 1.7 million years to 10,000 years BP. Most of Britain was glaciated as far south as the Severn-Thames line. the last Ice Age. Glaciation - . http://pubs.usgs.gov/factsheet/fs133-99/worldmap.gif. about 15 million square kilometres of the earth’s

GLACIATION - . glaciers. definition a slowly moving mass or river of ice formed by the accumulation and compaction of

Glaciation - . cgc 1d1. what are glaciers? . glaciers are huge masses of ice, formed on land by the compaction and

Glaciation - . ?. what do we know? what do we want to know? why should we care? how does it affect us?. glaciers- the

Glaciation - . learning intentions be able to understand the processes which occurred during the last ice age. be able to

Glaciation - . shaping of the earth. our planet has not always looked the same! there are many natural processes

Glaciation Revision - What you need to know. features of glacial erosionhow the features were formed including diagrams

Glaciation revision - . key points. at all three levels (foundation, general and credit) you have to be able to recognise