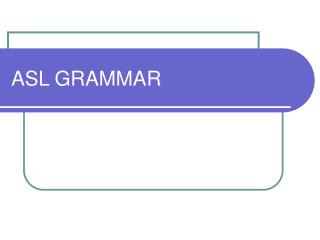 ASL GRAMMAR. Why do I have to point twice?. Pointing back to yourself or to the person you’re talking about shows completion of a train of thought. This allows someone to start signing without interrupting you.

The Cardiff Grammar: What is it? and Why is it? Robin P. Fawcett - Centre for language and communication research

Monday Grammar: Commas - . the rules. objective. students will be able to... - recognize dependent and independent

Chap 5 - . compilers. basic compiler functions . (1) a high-level programming language is usually described in terms of a