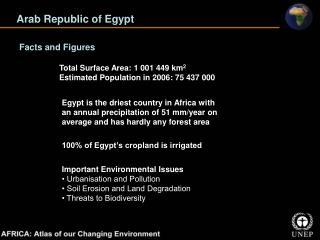 Arab Republic of Egypt. Facts and Figures. Total Surface Area: 1 001 449 km 2 Estimated Population in 2006: 75 437 000. Egypt is the driest country in Africa with an annual precipitation of 51 mm/year on average and has hardly any forest area. 100% of Egypt’s cropland is irrigated. ARAB REPUBLIC OF EGYPT - . central agency for public mobilization and statistics capmas. the 2006 population census in

Introduction Objective of the National Strategy Study in the Arab Republic of Egypt - Egypt nss on cdm. introduction