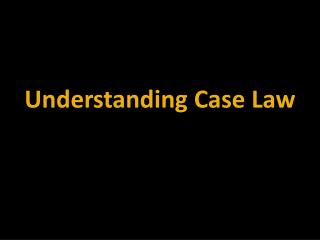 Understanding Case Law. Definition of a CASE a written record of a legal dispute that has proceeded through the courts Criminal Cases ● b egin when the Crown Attorney (acting on behalf of the Queen) files charges against someone (the defendant) who has allegedly committed a crime