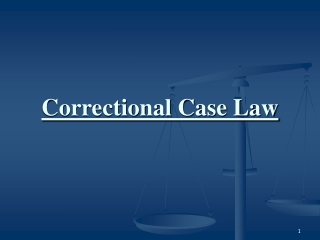 Chapter 1 - . the correctional system. key correctional goals. punishment of the offender. retribution. protection of the

Correctional Facilities - . what happens if you are found guilty of a crime? you go to jail!! . famous prison in ohio

VICTIMS CHARTER: ASSESSING THE EFFECTIVENESS OF IMPLEMENTATION (Dept. Correctional Services) - . overview of the

TAKING IT TO THE NEXT LEVEL: Core Correctional Practices - . paula smith, ph.d. school of criminal justice college of

Office of the Inspecting Judge - . presentation to portfolio committee on correctional services 1 september 2006 “the