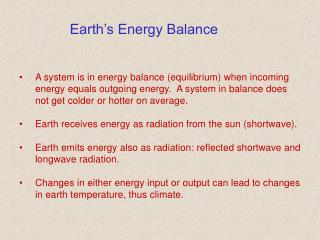 Earth’s Energy Balance. A system is in energy balance (equilibrium) when incoming energy equals outgoing energy. A system in balance does not get colder or hotter on average. Earth receives energy as radiation from the sun (shortwave). For every dollar spent on energy efficiency $3 dollars are save from the cost of a Renewable Energy System - . energy is

For every dollar spent on energy efficiency $3 dollars are save from the cost of a Renewable Energy System - . energy is

1st Law: Conservation of Energy - . energy is conserved. hence we can make an energy balance for a system: sum of the

Off - Balance Sheet Activities - . off balance sheet activities. contingent assets or liabilities that impact the future