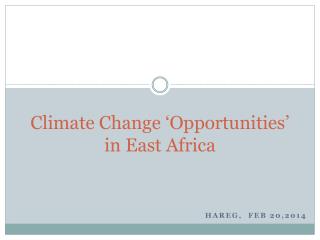 CLIMATE AND LAND USE CHANGE IN PACIFIC MESOAMERICA - . challenges for conservation of biodiversity and sustainable

Air &amp; Air Pollution - . see what you know. what is in the air? what is the difference between global warming and

The Cultures of Africa, Asia and the Middle East - . ss7g12: the student will analyze the diverse cultures of the people

The Geography of the Middle East - . kristen wilhite. middle east fun facts. the middle east is not a continent. it’s a

The Science of Climate Change - . explaining why we need to act now. prepared with material from npl (uk), ipcc, bom

Chapter 21: Global Climate Change - . foreword. the issue of global climate change may be one of the most important