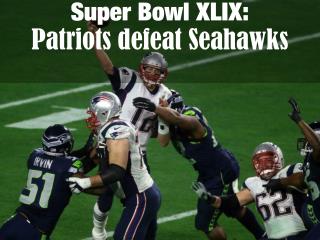 The Patriots defeated the Seahawks, 28-24, in Super Bowl XLIX to claim their fourth NFL championship. Tom Brady was the gamne’s MVP. I Can Be a SUPER FRIEND! - . created for tab by lisa grant &amp; rochelle lentini 2002. i like talking and playing