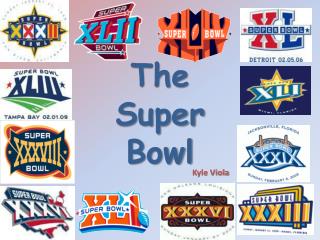 The Super Bowl. Kyle Viola. Why the Super Bowl has such a giant social gathering of people. The Pregame Many people enjoy watching all the different singers before the game starts. There are many activities and events the super bowl will setup for kids. Economics of the Super Bowl - . daniel ciancioso. case written by: victor matheson. introduction. super bowl is the most