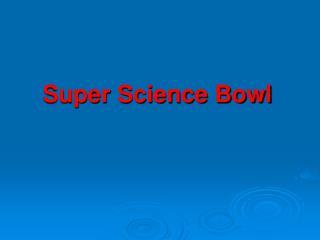 Super Science Bowl. Plate Tectonics. The theory of ______ ________ states that the earth’s surface is composed of slow moving plates that move due to forces deep within the earth. The movement of plates explains the location of many ___________ , volcanoes and mountain ranges. earthquakes. The Super Bowl - . kyle viola. why the super bowl has such a giant social gathering of people. the pregame many people