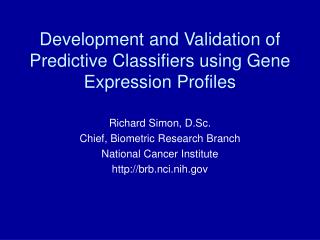 Development and Use of Predictive Biomarkers Dr. Richard Simon - . potential conflict of interest. none. development and

Mic 428 - Lecture# 11 Regulation of Gene Expression - . outline. requires review of chapter 7 before coming to class. the

Regulating Gene Expression - . turning genes on and off. procaryotes. procaryotes are bacteria and blue green algae they

Validation: an Example - . learning objectives: student is able to inquire in sufficient depth on the purpose of