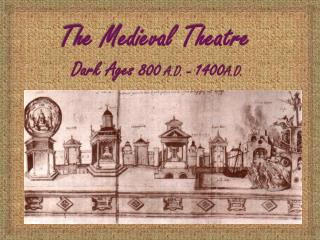 The Dawn Of Theatre - . audiences. there audiences were to be just the middle class people except if you were performing

MEDIEVAL EUROPE - . world history . learning targets. to describe the characteristics of the medieval period in world

Middle Ages: The Roman Catholic Church - . warm - up. 1. how was the roman catholic church a powerful force during the

The Middle Ages: Myth and Reality - . the middle ages: the myth. we think of knights in shining armor, lavish banquets,

Clothing In Medieval Times By Pinar Kapkin - . medieval age clothing. what did most people wear in the medieval ages?

The Middle Ages - . the middle ages. after the fall of rome, europe was in a state of chaos with no government also known