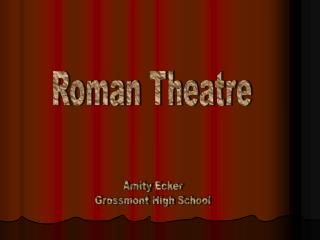 Julius Caesar, first Roman Emperor - . nothing withstood a roman battering ram!. hordes of barbarians from the

The World of Cinema and Theatre - . lesson 2. topic: watching films objectives: . to revise and enrich students’

Theatre through the Ages - . greek theatre had a religious significance and an offering was always made to the gods

Chapter 5 - . ancient rome and the rise of christianity. 5.1. the roman world takes shape. objectives:. describe the

Etruscan and Roman Art - . review for midterm. a: agesander, athenodoros, and polydorus of rhodes t: laocoon and his sons

Theatre Vocabulary - . some key words and phrases we will be using this year…. actor vocabulary- terms about the