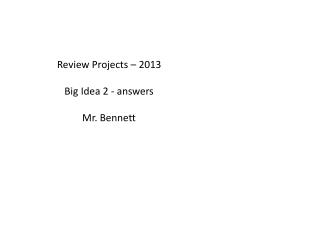 Review Projects – 2013 Big Idea 2 - answers Mr. Bennett. LO 2.1 Answers M.C . Question : Which of the following adaptations does NOT illustrate energy conservation within an organism? Large ears on the Fennec Fox A thickened cuticle on plant leaves ANATOMY UNIT 2 REVIEW ANSWERS - . (1) list out all of the different structures on a neuron:. dendrites cell body axon

DS200 IDEA GENERAL STRUCTURE - . purpose. the purpose of this presentation is to explain the setup and the use of ds200

Review Questions - . based on the idea of federalism, can individual states tell the federal government what to do?. no.

Projects - . projects grades hw. term papers/projects proposals are due on tuesday 10/23/12 . within a week we will give