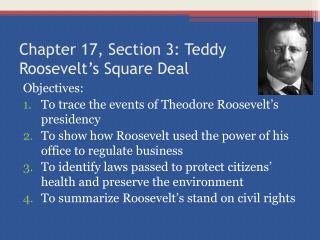 Chapter 17, Section 3: Teddy Roosevelt’s Square Deal. Objectives: To trace the events of Theodore Roosevelt’s presidency To show how Roosevelt used the power of his office to regulate business To identify laws passed to protect citizens’ health and preserve the environment FDR’s New Deal - . essential question. what programs were implemented as part of fdr’s new deal?. who is franklin

FDR and the New Deal - . distant cousin to teddy roosevelt fdr liked to be in control, had a charming personality, and

Where is Teddy? - . teddy, teddy, where are you?. i’m under the blue circle. i’m beside the purple triangle. i’m

Theodore Roosevelt’s Square Deal - . the main idea theodore roosevelt used the power of the presidency to push for

Roosevelt in Office - . roosevelt revives the presidency. in international affairs, roosevelt was a social darwinist

FDR and The New Deal - . franklin d. roosevelt came from one of the wealthiest families in the country cousin of theodore