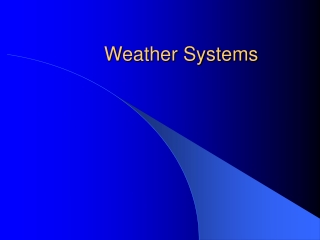 Weather Systems. Circulation Cells. Insolation is greatest at the equator, humidity is high, the airmass is unstable. The cold air at the poles is more dense, so there is a pressure gradient of about 1 in 8,000 toward the poles. Earth’s Climate Systems - . what is the difference between weather and climate?. weather is the condition of the

6.4.5: Weather Instruments - . in order to understand the conditions in weather systems and be able to make weather

High and Low Pressure Systems Weather Systems Unit - . regents earth science. by the end of this class, you will be able

Weather—Understanding it - . weather. why is it so important to understand the weather?. weather. is the atmospheric

WEATHER SYSTEMS - . weather and climate. weather. weather describes the conditions of the atmosphere at a particular

“Weather”… You Like it or Not - . a weather unit introduction. what do you think about, when you hear the word