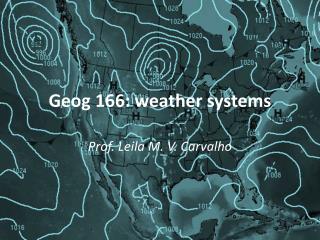 Geog 166: weather systems. Prof. Leila M. V. Carvalho. objectives. The weather analysis will be focused first on the formation and evolution of extratropical cyclones We will discuss a case-study that caused strong winds and heavy precipitation to parts of the central United States Ch15 Global Circulation and Weather - . weather patterns are caused by differential heating of the earth’s surface,

Weather Dynamics - . section 13.1 a closer look at the earth. weather : is a set of environmental conditions encountered