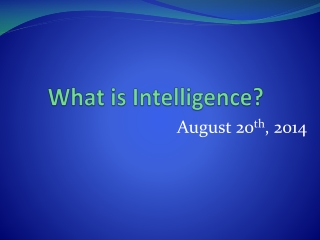 What is Intelligence?. August 20 th , 2014. Warm Up. Start at the Table of Contents in your Source Book. Label today’s Warm Up in the manner below. If you have space left over from yesterday’s Warm Up, make a HORIZONTAL LINE beneath it and then begin today’s Warm Up.