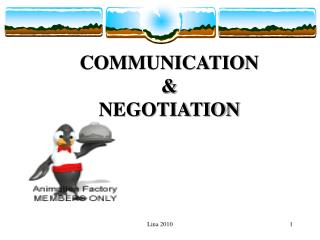 BUSINESS COMMUNICATION AND NEGOTIATION - . radu rĂducan. objective. t he overall objective of this course is to develop

Session 13 - Session objectives. this session will provide a framework for successful negotiation, give guidance on

ADOPTION AND CULTURE IN SA POLICY PERSPECTIVE - . what is adoption. adoption i s a legal process whereby parental powers,

Negotiation: Integrative and Distributive Bargaining - . negotiation is an interpersonal decision-making process by which

Cips Negotiation Challenge - . round 1. negotiation – a definition. a process through which parties move from their

Negotiation - . rules &amp; strategy. what is negotiation?. the process of reaching an agreement between multiple

Negotiation - . purpose of negotiation. c ommunication between parties to reach an agreement to satisfy your interests or

Elements of Negotiation - . hernán rosenberg mexico, april 2011. projects and negotiation. resources, but not just that

NEGOTIATION PROCESS - . negotiation and communication. communication has no determinate beginning or end human

Chapter 4: Barriers to Intercultural Communication - . this is the first of three chapters meant to help you recognize