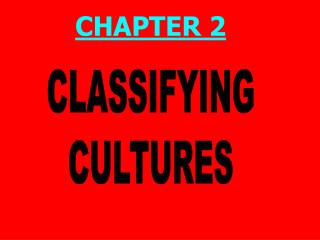 CHAPTER 2. CLASSIFYING CULTURES. CULTURE CLASSIFICATION PRISMS. Why are cultures really simple to understand? What makes some cultures more difficult to adapt to than others? How do cultures perceive reality differently? How is it possible to understand your own culture as it really is?