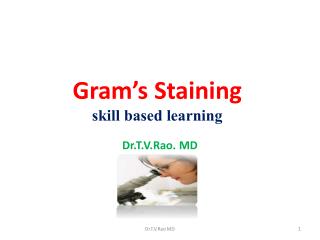 Chapter 6 Learning - . learning. learning is defined as any relatively permanent change in behavior that is based upon

FOSBAC PLUS T (F+T) IN BROILER PRODUCTION - . technical department bedson africa. what is f+t. it is a broad spectrum

The Characteristic and Classification of Skill - . section 5.1. introduction. working in groups of three develop and

Reinforcement Learning - . mainly based on “reinforcement learning – an introduction” by richard sutton and andrew

Gram negative rods and cocci - . endotoxin: lipid a, the superantigen part of lps of the gram negative outer membrane

EMB agar - . only gram-negative bacteria grow on emb agar. (gram-positive bacteria are inhibited by the dyes eosin and

A Skill of Sanctification - . learning the principles of proper biblical interpretation. our privilege and