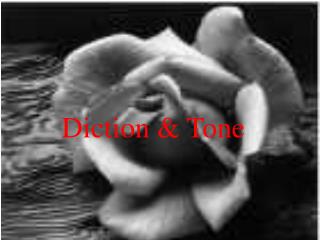 Diction & Tone. Diction refers to the author’s choice of words. Tone is the attitude or feeling that the writer’s words express. When analyzing diction, consider such questions as:. Is the language concrete or abstract? Are the words monosyllabic or polysyllabic? Diction - . lecturer: yetta. what is diction?. diction is the choice of words which expresses the writer’s ideas and

Exercises in Writing Style - . prepared by ms. teref based on voice lessons. lesson 1: diction. “art is the antidote

is proud to sponsor Tone at the Top: The Ethical Standards Set By Senior Management on behalf of the - . overview of

Analysis of Diction and Syntax - . close reading strategy. what is

Diction - . literature and the choice of words. diction. words have three levels, and are selected based on their