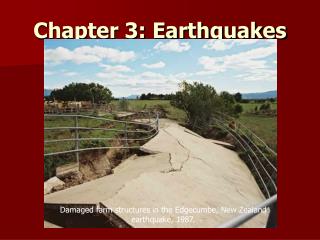 Chapter 3: Earthquakes. Damaged farm structures in the Edgecumbe, New Zealand earthquake, 1987. Videos. Earthquake Destruction Earthquakes 101 Why do Earthquakes Happen?. What is an earthquake?.