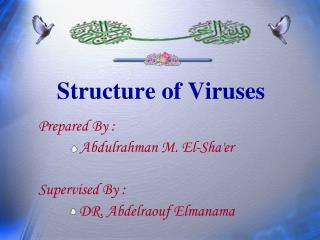 Structure of Viruses. Prepared By : Abdulrahman M. El-Sha'er Supervised By : DR. Abdelraouf Elmanama. SIZE & SHAPE. Viruses range from 20 to 300 nm in diameter; this corresponds roughly to a range of sizes from that of the Chapter 2: The Structure of Viruses and Cells - . viruses. virus - piece of hereditary material covered by protein that

GENETICS OF VIRUSES - . 1950’s- viruses observed. the smallest viruses are only 20 nm in diameter the virus

Cultivation of Viruses - . by. dr. emad abdelhameed morad. lecturer of medical microbiology and immunology. viruses are