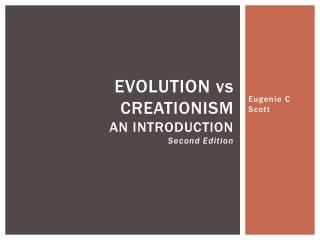 Evolution vs Creationism An Introduction Second Edition. Eugenie C Scott. What do you know about the evolution/creationism controversy? What do you think are the main obstacles teachers have to teaching evolution in the classroom? What questions do you have about the controversy?. discuss.