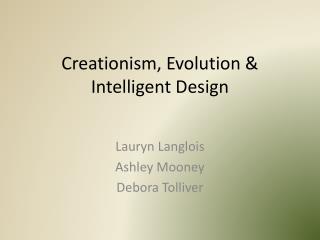 Creationism, Evolution & Intelligent Design. Lauryn Langlois Ashley Mooney Debora Tolliver. What is Creationism?. Creationism is a theory that states that matter, life, and the world were created by God (or some other supreme being in different religions) out of nothing.