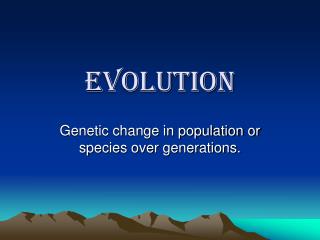 Evolution. Genetic change in population or species over generations. Look at us now!!!. Put some clothes on!. Theories of Evolution. I. Lamarck ’ s Explanation : French scientist (1744-1829) Proposed that similar species descended from a common ancestor (fossil records)