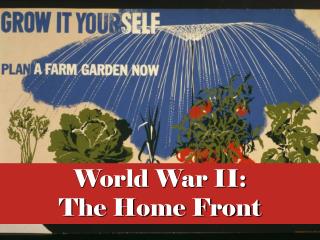 World War II: The Home Front. Essential Questions. How did America initially respond to the events leading to WWII? How did the war change the American home front, both culturally and socially? How did the war transform the U.S. economy both immediately and in the long term? On the Home Front - . minorities in war. home front contributions. what group do you think was excluded from this

Academic World Q uest 2013 - . we wish to thank the staff of the henry a. wallace center at the fdr presidential library

Chapter 17 Section 4 THE HOME FRONT - How did the war and its immediate aftermath affect the following?labor,

Why did the Civil Rights Movement Occur in the 1950s and 1960s? - . wwii legacy – . african americans involvement both

At Home Around the World - . by lucy floyd. author: lucy floyd. lucy floyd grew up in south carolina. her father was a

All Quiet on the Western Front - . test review for english 10. multiple choice. the setting for the novel all quiet on

THIS - . is. jeopardy. your. with. host. mrs. moore. jeopardy. a bloody conflict. the war’s impact. academic

Lesson 8 World War I: End of the War, Seeds of the Next - . turn off cell phones!. lesson objectives. • understand the