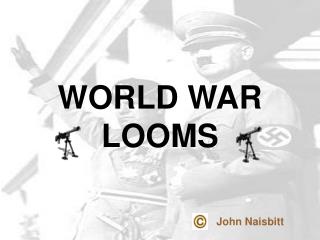 WORLD WAR LOOMS. John Naisbitt. SECTION 1: DICTATORS THREATEN WORLD PEACE. For many European countries the end of World War I was the beginning of revolutions at home, economic depression and the rise of powerful dictators driven by nationalism and territorial expansion.

The challenge of 15-24 year olds in Digital Entertainment - . peter olaf looms. this evening’s menu. who i am and what

Making the most of the World Cup - The 2006 world cup will be watched by over 1 billion people around the globe. making