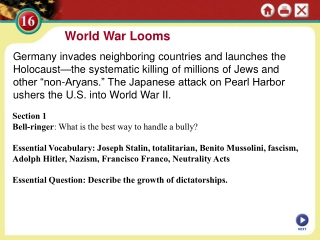 World War Looms. Germany invades neighboring countries and launches the Holocaust—the systematic killing of millions of Jews and other “non-Aryans.” The Japanese attack on Pearl Harbor ushers the U.S. into World War II. Section 1 Bell-ringer : What is the best way to handle a bully?