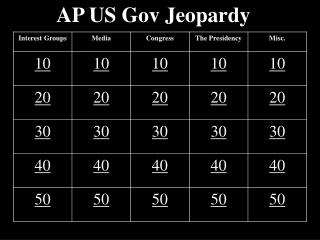 AP US Gov Jeopardy. Interest groups are sometimes referred to as Lobbies Charges Delegations Political Action Committees Caucuses Interest Groups– 10 points. A group that focuses on influencing elections rather than trying to influence the elected is called A lobbyist An iron triangle AP US History Midterm Review Jeopardy - . ap review jeopardy – home board. if you see this slide it means mr. keeler

Intro to AP Gov - . what is the purpose of government? make your own definition of government what do you picture when

Ap Gov Chapter 1 - . what are the two main questions of government?. who governs and to what ends?. what is power?. the