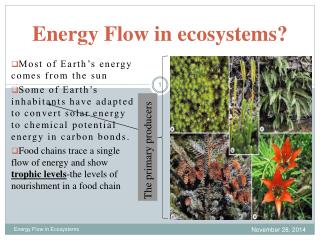 Energy Flow in ecosystems?. Most of Earth’s energy comes from the sun Some of Earth’s inhabitants have adapted to convert solar energy to chemical potential energy in carbon bonds. Food chains trace a single flow of energy and show trophic levels -the levels of nourishment in a food chain. Interdependence of Life: Ecosystems - . discuss this ecological terminology. which of these words do you know?

Envi-Sci Quiz Prep 10.4 - . from. energy flow in ecosystems reading notes. what is the source of energy plants use to

Chapter 6 Metabolism: Energy and Enzymes - . cells and the flow of energy. energy is the ability to do work. living