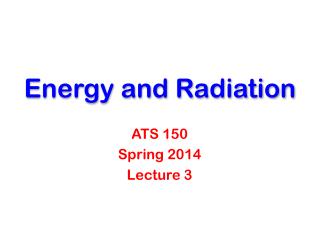 Energy and Radiation. ATS 150 Spring 2014 Lecture 3. Defining Energy is Hard!. “ Energy is the capacity to perform work ” (but physicists have a special definition for “ work, ” too!) Radiation and Thermal Energy - . our model of the atom evolves. in a chemical reaction, what is happening to the system

Energy, matter and radiation - . (much more interesting than it looks like) (well not really, but shut up and take

Nuclear Energy Effects and Uses of Radiation - . chapter 31. nuclear reactions and the transmutation of elements. section