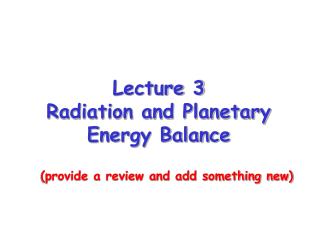 Global dimming and brightening: variations in solar radiation reaching the Earth s surface - The radiation balance of the

Surface Energy Balance (1) - . review of last lecture. the mission of meteorology is to understand and predict weather-

THERMAL RADIATION - . definition of thermal radiation. this is how heat energy moves from a hot to cold region by means

Air and Surface Temperature - . radiation receipt. the sun transmits its energy to the earth through radiation. solar