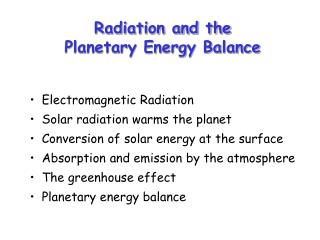 Radiation and the Planetary Energy Balance Radiation and the Planetary Energy Balance. Electromagnetic Radiation Solar radiation warms the planet Conversion of solar energy at the surface Absorption and emission by the atmosphere The greenhouse effect Planetary energy balance. Spectrum of the sun compared with that of the earth.

Radiation and the Planetary Energy Balance

RADIOACTIVITY - . chapter 28. what is the radioactive ?. radioactivity is a phenomenon in which an unstable nuclei

The proportionality can be replaced by an equality: - Quanta : the smallest quantity of energy that can be emitted in the