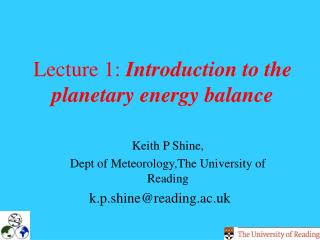 Lecture 1: Introduction to the planetary energy balance. Keith P Shine, Dept of Meteorology,The University of Reading k.p.shine@reading.ac.uk. Structure. The solar “constant” – how much solar radiation is absorbed by the Earth The effective emitting temperature of the Earth

Introduction to Regression Lecture 2.1 - . review of lecture 1.1 correlation pitfalls with regression and correlation

Chapter 3 From Chemistry to Energy to Life - . this lecture will help you understand:. the fundamentals of environmental

GIS for Planetary Geologic Mapping - . tools and methods to get started using gis geologic mapping prepared for a nasa

Lecture Outlines Chapter 2 Environment: The Science behind the Stories 4th Edition Withgott/Brennan - . this lecture will