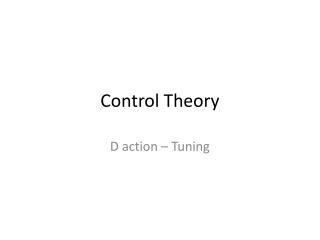 Control Theory. D action – Tuning. Derivative Action. When there’s too much oscillation , this can sometimes be solved by adding a derivative action. This action will take into account how fast the error signal is changing . In the time domain this leads to : Control Theory - . d action – time delays. derivative action. when there’s too much oscillation , this can sometimes

CONTROL THEORY - . session 1 – the concept of feedback. which block scheme represents the level control depicted in the

Control Theory - . bode stability criterion. other view on stability of cl. where the phase of the open loop tf equals

Control Theory - . i and d. the formulas. about the pre-class quiz. i could solve it i couldn’t get started i could

Control Theory - . integral action. the formulas. introduction. steady state error of the servo problem to a step of size